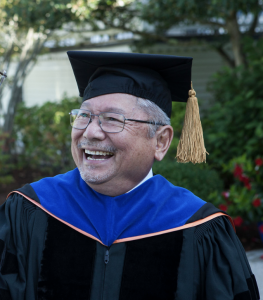 The journey began, you have said, at the age of eleven when you encountered your first orchid. Spellbound by this rare and fragile creature, you went on to dream of some day directing the Botanical Garden in your home of Singapore. That journey took an unexpected, and at the time unlikely, turn when you chose to attend Williams, about as far away as you could culturally and climatically get. But here your love of nature grew even deeper, and after graduate training and work at Florida’s Selby Gardens, you returned home to a position at the place of your childhood dreams. What had become a neglected gem you managed to develop into a place rare and beautiful enough to be designated a UNESCO World Heritage Site. Then, as the founding CEO of the National Parks Board, you led the transformation of Singapore more broadly into what is now known as a City in a Garden. The crowning achievement of that effort has been the opening of the instantly iconic Gardens by the Bay—a one billion dollar project with one and a half million plantings over two hundred and fifty acres. Since opening in 2012, it has received more than fifty million visitors, won multiple awards, and become part of worldwide popular culture. It has also become a premier center for research, education, and preservation, and has shown quite spectacularly how a city as densely populated at Singapore can be turned into a place where wonder blooms. In recognition of your distinguished achievement in horticulture, Williams College is proud to honor you with its Bicentennial Medal.

President Maud S. Mandel has announced plans for the fall 2020 semester. More details here. Please note that all Williams College buildings are closed to the public until further notice.