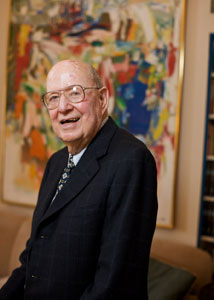 One of the most celebrated historians of American undergraduate education, Frederick Rudolph’s scholarly achievements and civic contributions to Williams span more than seven decades. As a member of the Class of 1942, Rudolph was a house officer, junior advisor, member of College Council and the Gargoyle Society, and editor of The Williams Record. After serving as a captain in the U.S. Army, he returned to Williams in 1951 to teach history. He continued in that role until 1982 and is currently the Mark Hopkins Professor of History Emeritus. During his tenure on the faculty, he pioneered the interdisciplinary program now known as American Studies and wrote two classic texts on higher education, The American College and University: A History and Curriculum: A History of the American Undergraduate Course of Study Since 1636. Rudolph is also author of Mark Hopkins and The Log. In addition, he has served as class president, chair of his 50th reunion, Tyng administrator, college marshal, and member of the Bicentennial Commission, the Bicentennial Committee, and the Williams College Museum of Art Visiting Committee. He received his Ph.D. in history from Yale University in 1953.

Covid-19 is an ongoing concern in our region, including on campus. Safety measures are in place, and campus community members and guests are additionally advised to take personal precautions. See the college's Covid-19 website for information about campus policies. For the latest research and recommendations from the CDC, visit cdc.gov/coronavirus.